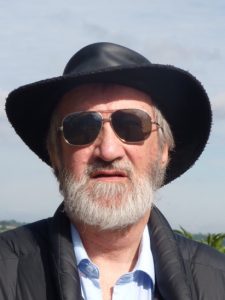 There will be an event to remember Chris at Cottingham Village Hall Annex, Berryfield Road on Sunday 4th December from 12 noon to 6pm.

You are welcome to come for as long as you like within that time. Details are still being sorted but there will be plenty of food and probably some live music from local musicians. There will be a chance to sit around and chat to people who knew Chris and to look at some photos of him at various ages and involved in a selection of activities such as music, scuba diving, sailing and helicopter rides.

Chris and Diana moved to School Lane in Cottingham in 1985. In those days you may have seen him driving around in his red van or out and about on a succession of motorbikes, then for several years using the local buses and more recently walking up to the village shop using his white stick, easily noticeable because of his black hat.

Chris had three careers: research pharmacologist, science teacher, then psychotherapist. He also had many interests including photography, motorbikes, music (he played bass and guitar in several local bands and sang with Valley Voice), scuba diving and, when his sight became too bad for most of those, sailing with Northampton Sailability.

In 1999, after a few years on dialysis, Chris had a kidney transplant which gave him and Diana the chance to travel and they were able to visit friends and family in Australia, New Zealand, California and Turkey.

“Until he became very ill in recent months, Chris made the most of what he was able to do rather than dwelling on what kidney failure and blindness prevented him from doing,” says Diana.

“If you like being outdoors and have some spare time Northampton Sailability is a worthwhile charity to volunteer for, and please check that you are on the organ donor register, it can make a huge difference to somebody’s life.”