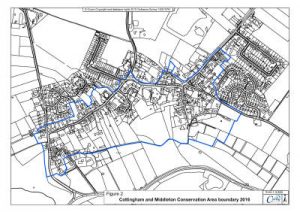 Living in a conservation area

The conservation area for Cottingham and Middleton covers the older parts of both villages and some of the land surrounding the built areas which have been identified as forming an important part of the villages’ historic and rural setting. View map

Living in a conservation area places some restrictions on changes to buildings, demolition of buildings, walls and outbuildings, and the felling / pruning of trees. You can find more information on Corby Borough Council’s website.

In April 2016, following two rounds of public consultation, Corby Borough Council adopted ‘The Cottingham and Middleton Conservation Area Appraisal and Management Plan SPD (Supplementary Planning Document)’. This document extended and joined the two previously separate conservation areas for Middleton and Cottingham to cover a wider area including some of the land surrounding the built areas of the villages which have been identified as forming an important part of the villages’ historic and rural setting. This includes the piece of land between Cottingham Hall and the Jurassic Way which had been proposed for housing development (rejected by the Planning Inspector at appeal in January 2016).

There were two periods of public consultation. The first ran from 7 September to 19 October 2015 and attracted 46 responses; the second (following revisions to the document) ran from 22 February to 28 March 2016, attracting 23 responses.

In the second consultation, several residents raised concerns that a large field to the North of Rockingham Road, which was included in the original consultation area consultation, had been removed from the revised document. Corby Borough Council has advised that, according to Historic England guidance, conservation area designation should only be used to protect wider landscape if it is an essential component of a wider historic area. It was felt that, although this field contributes to the experience of the space and area, it does not have the historic association which would warrant its inclusion in the extended conservation area.