Organised by the Peterborough Diocesan Guild of Church Bellringers, our local bell ringers are aiming to ring all the church bells in the Benefice over the Jubilee weekend.

You will be able to hear the bells at St Mary Magdalene Church, Cottingham, ringing out from around 9.30am on Friday 3 June. This will be followed at 10am by a short 30 minute church service led by Rev Amanda Oliver. Everyone is welcome.

Bell ringing is a sociable, fun and healthy hobby, and we don’t have any bell ringers based in Cottingham or Middleton at the moment! If you’d like to give it a try, contact Andy Bimson on 0781 678 7639. He’d love to welcome anyone who’s interested to pop along to Ashley Church on a Monday evening or Wilbarston on a Tuesday evening, and have a go on the ropes! 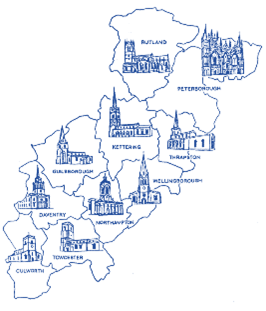 Nearly 26 years later on 6 February 1952, after staying at the Treetops Hotel in Kenya, Princess Elizabeth learned of the tragic death of her father and so became the monarch who was to have the longest reign in history.

This year, the 70 years of her reign are being marked in many different ways across the country, particularly over the extended bank holiday weekend in June.

The PDG are marking the year with specially arranged ringing performances, for example, over 60 towers and 240 ringers were involved in ringing to mark her accession in February and a peal of Treetops Triples was rung at Peterborough on Sunday 6 February 2022.

Over the decades, the ringers of the Peterborough Diocesan Guild have gathered to ring for a wide variety of royal occasions. For example, peals were rung at Naseby on 15 December 1948 for the christening of Prince Charles, and at Daventry on 26 June 1982 to celebrate the birth of Prince William, and later on 19 June 1999 on the occasion of the marriage of HRH Prince Edward and Sophie Rhys-Jones.

Commemorative ringing, in the form of many quarter peals took place in 2002 following the deaths of Princess Margaret and the Queen Mother.  Whilst the lives and work of the Royal Family strike a chord with many bands, there are other statesmen who have been acknowledged in a similar way, for example, a peal was rung on 14 October 2006 at Saltby remembering Nelson and the British fleet cruising off Cadiz one week before the 200th anniversary of the Battle of Trafalgar.

Anniversaries and Jubilees are always a cause for celebration.  A cascade of peals and quarter peals in 1997 were rung to mark the golden wedding Anniversary of the Queen and Prince Phillip.  The following excerpts from Guild reports highlight ringing held by the Guild for the Jubilee years.

As part of the Her Majesty the Queen’s Diamond Jubilee, eight bells were cast at Whitechapel Bell Foundry and led the Thames Pageant of 1,000 boats with a floating belfry from which the bells were rung.