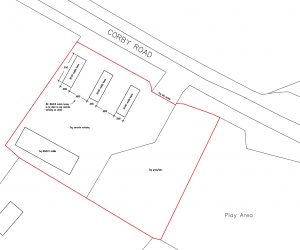 At a meeting of Corby Borough Council’s Development Control Committee on 12 September 2017, councillors unanimously approved planning application 17/00355/RVC to vary the conditions of the planning consent granted for Little Meadow to allow for up to four mobile homes to be present on the site at any one time. Permission has been granted on the condition that the site is occupied by the applicant and his family only.

View report and recommendation to committee.

This application replaced the previous planning application submitted in August 2016 (which was subsequently withdrawn) to increase the number of mobile homes on the site to six.

A meeting of Cottingham Parish Council’s planning committee was held on Thursday 25 August to consider the planning application Attended by around 30 to 40 people, the main points and concerns raised by residents were:

An application for the site’s temporary planning permission to be made permanent was turned down by Corby Borough Council in April 2012. This decision was subsequently overturned at appeal by the Planning Inspector in February 2014. The Inspector granted permanent, non-personal permission for the site subject to conditions. Although the Inspector agreed with many of the points made by Corby Borough Council in relation to harm, and the approach taken to try and negotiate with the appellant during the application process, other matters were given more weight which is why consent has been given.

On the advice of its appointed solicitors, Cottingham Parish Council took the decision to withdraw its case contesting the Planning Inspectorate’s decision to uphold the Little Meadow planning appeal. The reasons for this decision were explained in detail at a special meeting held in the Village Hall Annex on Monday 2 March.

Cottingham Parish Council gained approval from nearly 200 people at a public meeting to challenge the Planning Inspector’s decision in the High Court. A ‘fighting fund’ was set up and villagers donated £17,500 to help fight the case.

The Planning Inspector upheld both appeals and granted temporary planning permission for five years “for the stationing of no more than two caravans, as defined in the Caravan Sites and Control of Development Act 1960 and the Caravan Sites Act 1968 (of which no more than one shall be a static caravan or mobile home)”.

After planning permission for a mobile home on Little Meadow had been refused by Corby Borough Council, appeals were submitted against the refusal of planning permission and also against an enforcement notice to remove the tarmac on the site and reinstate the land to pasture.