In memory of Viola Licquorish 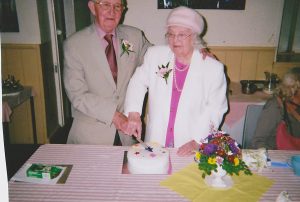 My dear Mum was born on the 2nd April 1920 to Beatrice and Charles Langley. She was born in her Grandma’s bedroom in Middleton, the house is still there, next to the Red Lion Public House, and later moved to a cottage in Main Street.

Mum’s sister Doreen was born five years after her. I have some lovely photographs of them with their arms around each other and playing in the garden.

She had a very happy childhood, spending lots of time with her friend’s Edie and Rose playing in the fields and orchards which started her love of nature. They used to go on bike rides and picnics and spent time with the animals on the farms.

Mum had other special friends at school, Sylvia and Evelyn. She was a good scholar and won several prizes. She liked drawing, ( I have her sketch pad ), reading and sewing. Although she didn’t think so her handwriting was lovely and we have 30 years of diaries which she wrote in later times and which are full of interesting news about the family.

Mum also represented Cottingham School in the hurdles at County competitions and came second. Mum left school at 14 and went to work as a machinist at the local factory.

Although Mum and Dad had been at school together, it was during the next few years that they became close. A lot of time was spent here at the Chapel and all the many events that were taking place at that time. They were both Sunday School teachers and were involved in drama and singing groups. Both families were friends and my Grandma’s were the ‘tea ladies’.

Mum always enjoyed spending time with Aunt Doreen and their  Auntie’s Annie and Doll. Aunt Doll became a big part of Mum and Dad’s life in later years with holidays spent together.

Mum later went to work in the offices of the then Stuarts and Lloyds steel works and had a responsible job, particularly during the war years.

Mum and Dad married in 1943 and had over 72 very happy years together. They lived in rooms at Aunt Doll’s house when they were first married and were happy living there and enjoyed watching Jill and Aunt Doreen‘s son Malcolm grow up.

They then moved into a cottage next door and when I was two we moved to Berry Field Road and we lived in two homes in the road.

Because she had lots of interests Mum was always busy. She spent time with her Mum and Dad who at that time had moved to Berry Field Road. Knitting, sewing making lots of my clothes, including later, my wedding dress. Gardening was a shared interest with Dad, Growing lots of vegetables and fruit and making preserves. Mum was a good cook and baked a lot. During their marriage they had several dogs, who were very special to them, taking them out for walks.

Mum continued to worship and support the Chapel, including being a member of the Choir, Wesley Guild and becoming an officer of the Girls Brigade.

We had several lovely holidays with Sylvia, Arthur and the girls. Later we had many great holidays when Edward and Adam were growing up. Mum was very encouraging to John, the boys and myself in whatever we were doing. She was immensely proud of the boys and what they had achieved. She loved hearing about the children during the years I worked at the school.

Mum and I had lots of outings together, visiting various places, shopping and several trips to London which she really enjoyed, with many laughs. Mum always wanted to increase her knowledge of things. She was always interested what the family and extended family were doing. Events within the family, ‘Chapel do’s’ and friends were very special to her. She was thoughtful and kind in her own quiet way. Many of the deeds Dad carried out were instigated by Mum.

Up until two years ago they were Holidaying, going out and about with us and meeting friends.

Then Mum’s health changed. She was struggling at home, spent 13 weeks in hospital before coming home to be looked after by us and carers.

When Dad passed away Mum went to Cheaney Court Care Home in Desborough where her quality of life was greatly improved. Although she was registered as partially sighted and unable to walk. She sat in her chair noticing various things that were going on. She started eating again and talking to people, the two of us made many friends. Thanks to family who visited Mum, very special thanks to Jill for all the times she sat with Mum so I could have a break. Mum enjoyed her ‘Jill days’.

When Mum went to hospital for a day visit, although we were with her, she didn’t want Georgina, her carer, to leave until she took her ’home’. That is how bravely she had accepted her situation. I am so thankful and very grateful for the care Mum received from the Carers, Nurses and Doctor at Cheaney Court including the support of Alan the manager and Lorraine the administrator.

Mum died peacefully with excellent care to the end.

Many thanks to John ’the taxi’ and all he has done for me and Mum. She always asked for John to do certain things for her. Also thanks for all the support received from Edward and Adam. We also felt the benefit of prayers from all our friends at Chapel and the wider community.

I found these words in some papers, although not in Mum or Dad’s handwriting, they must have meant something to them.

Dad outstretched his hands and now Mum is with him, in Glory.