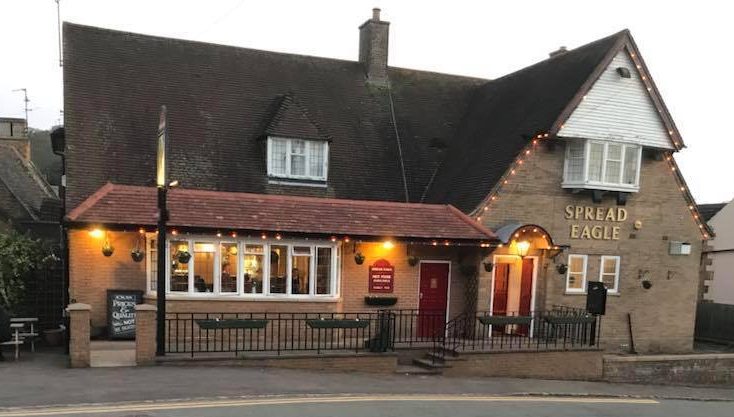 A planning application (Ref NC/21/00464/DPA) has been submitted to create an independent first floor flat and convert the back bar at the Spread Eagle pub into two self contained, 1 bed ‘letting rooms’ with amenity space and car parking space. The lounge and restaurant area would remain as they are. You can view the planning application on the North Northants Planning Portal. The deadline for comments is 17 November 2021.

The Spread Eagle pub is back on the market for £400,000 with Harborough estate agents David Walker Commercial. View details

The pub, which closed at the start of the Coronavirus pandemic in March 2020 and has not re-opened, has been the subject of a number of planning applications over the past few years, submitted by the property’s owners William Masson and Thomas Southall.

You can find details of the planning applications and the history of the pub in the dropdown sections below.

In October 2018, a planning application (reference 18/00617/DPA) was submitted for ‘part change of use’ to erect a three bedroom house on part of the pub car park, leaving 12 of the existing 23 car parking spaces in place for use by the pub. A parking survey was then carried out in September 2019 covering the pub car park and the village streets within a 200 metre radius of the pub, and slightly revised plans were submitted allocating 13 parking spaces for the pub. 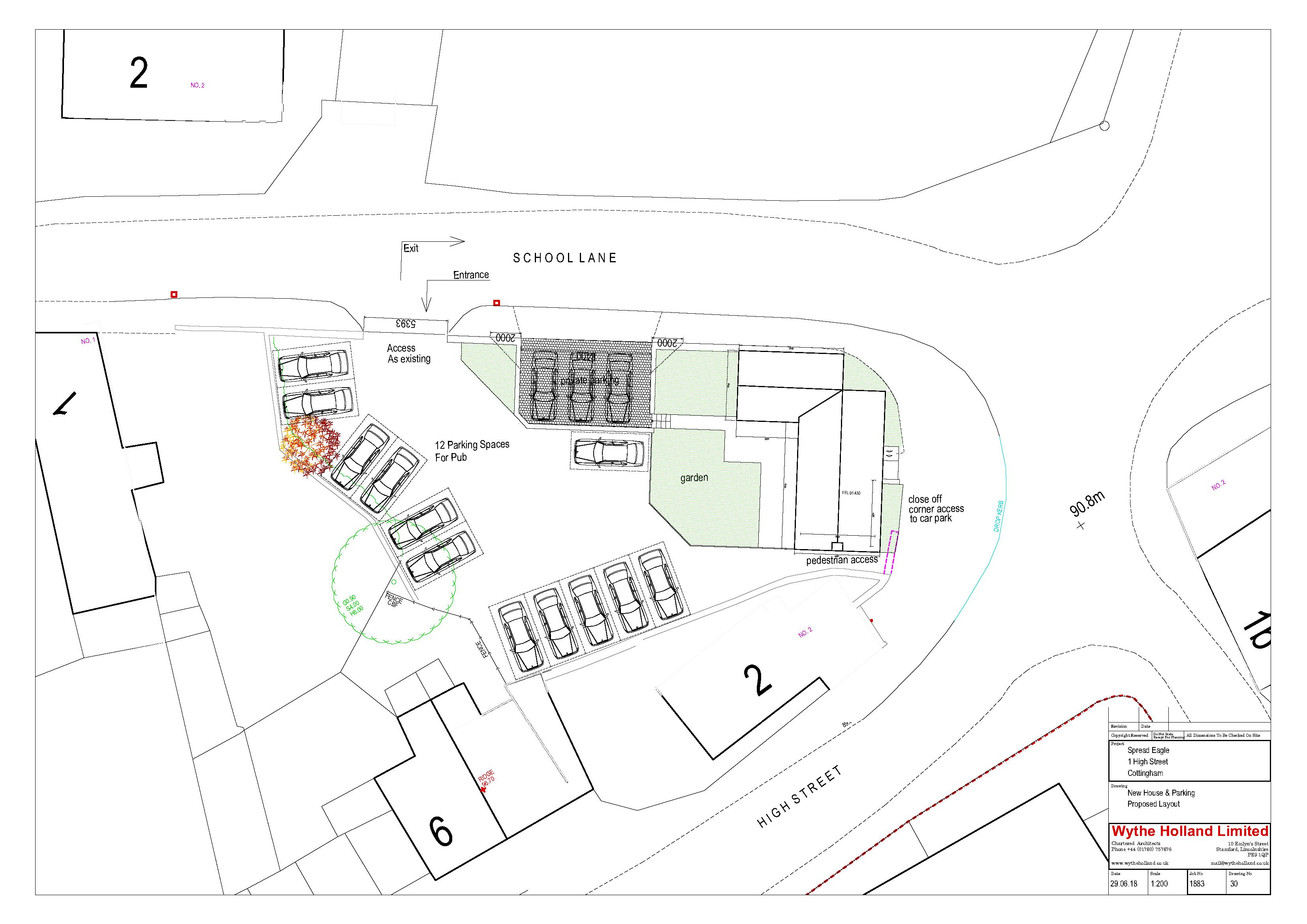 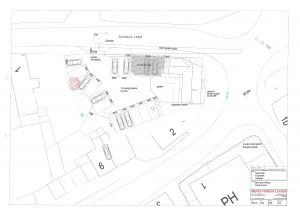 On 11 February 2021, the planning application was REFUSED by Corby Borough Council’s Development Control Committee by a majority of 4 to 3 with 1 councillor abstaining. View report to Committee. The application had been considered by the DCC prior to this, on 16 December 2019, but councillors agreed unanimously that a site visit was needed before a decision could be made. At that meeting, Owen Davison raised his objections and Sarayou George did the same on behalf of Cottingham Parish Council. View report to committee. 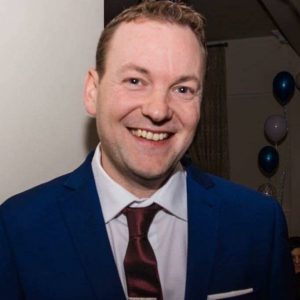 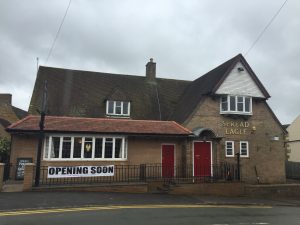 April 2018: The Spread Eagle pub is set to re-open the week commencing 16 April, offering lagers and bitters along with traditional ales, a range of wines and specialty gins. A new chef has also been appointed and the pub will be serving a menu of hearty, home made pub food including lasagne, lamb shanks, burgers, steaks, pizzas and jacket potatoes, as well as light bites for the afternoons.

New landlord Rob Wainde (pictured above) has lots of experience in the hospitality business, having managed a working men’s club in Leicestershire for 18 years and most recently running a village pub.

The Spread has been cleaned inside and out and redecorated, and the fireplace has been reinstated in the lounge. “We’re looking to create a homely, welcoming environment at the heart of the community and will be offering food from day one,” said Rob. “We’re also planning to put on quizzes, events and live music and would welcome ideas from villagers as to what they would like to see happening at the pub. I look forward to meeting you all and welcoming you to the Spread Eagle.”

In 18 September 2017, an appeal was lodged against the decision to refuse planning permission to convert the Spread Eagle into a house (appeal reference APP/U2805/W/17/3180095). The appeal was rejected by the Planning Inspectorate on 9 November 2017. View appeal decision notice

Following the dismissal of the appeal, the car park was closed off for public use. View notices below (click for larger view).

Around 20 August 2017, Yates Estate Agents in Corby started to market The Spread Eagle as a commercial property, with a restrictive covenant applying to both the pub and car park which will restrict their use to a Public House and the ancillary car park for the use of the pub only. View advertisement.

In mid July, the property was being marketed as a three bed detached house in the residential section of Yates’ website (and on www.rightmove.co.uk). These adverts were removed around 25 July.

A planning application (reference 16/00512/COU) to convert the Spread Eagle pub into a house was submitted on 16 December 2021. Following a meeting of Cottingham Parish Council’s planning committee on 9 January 2017, attended by more than 40 local people, the Parish Council opposed the planning application on the basis that the Spread Eagle does have community value and that it could be viable as a business under the right management.

Corby Borough Council received 24 objections to the planning application and 1 letter of support, and refused the application on 19 May 2017. The Council said that the change of use would conflict with the Local Planning Authority’s objectives which seek to support and enhance community services and facilities, where appropriate by safeguarding them. They also said there was insufficient evidence that the pub was not economically viable or that all options for its continuance had been fully explored.

Cottingham Parish Council’s application to have the Spread Eagle Public House listed as an Asset of Community Value (ACV) has been rejected by Corby Borough Council’s Community Right to Bid Panel.

The main reason cited by the Panel for rejection of the application is that there was not enough frequent community activity in the building to demonstrate that this facility was essential for the social wellbeing and social benefit to the local community.

“The Panel agreed that there was not enough evidence to demonstrate the building is being used extensively by the local community. No substantive evidence could be found that showed the closure of the Spread Eagle Public House has lead to a significant local community detriment. There are two other alternative public houses and other community facilities locally that could accommodate the small number of community groups that have used this building previously.”

History of the Spread Eagle in Cottingham

The current Spread Eagle pub was built in the 1960s, replacing the original Spread Eagle, a thatched cottage, that had operated as a pub on that site since at least the mid 1800s. For more information on the history of the pub, see the Cottingham History website, cottinghamhistory.co.uk/pubs-Spread.htm

In the late 1800s, there were five pubs in Cottingham (The Spread Eagle, The Royal George, The Crown on the corner of Rockingham Road and School Lane, The King’s Head on Church Street and The Three Horseshoes on High Street) and three pubs in Middleton (The Red Lion, The Woolpack and The Exeter Arms).