Allston Kisby and the Shipwrecked Sailor 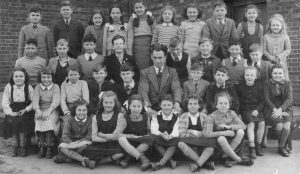 Many villagers fondly remember Allston Kisby, who was a class teacher and then headmaster at Cottingham School from the 1930s to the 1970s. As editor of the www.cottinghamhistory.co.uk website, I was delighted to be contacted recently by Philip Chatfield a survivor of the shipwreck of the historic brig Maria Asumpta which was lost off the north coast of Cornwall in May 1995 with the tragic loss of three of her crew. Built in 1858, the Maria Asumpta was at the time the oldest sailing ship in the world still sailing.

“I had been a regular crew member, carpenter and gunner on this ship for five years,” said Philip. “I had taken with me on that last fateful voyage a nice old copy of Erskine Childers’ novel The Riddle of the Sands. I had only got half way through it at the time of the shipwreck and, naturally, the book was lost along with pretty much everything else I had on board with me.

“Over the years I have kept an eye open for a replacement and recently purchased a copy from a book dealer in Ramsgate. When I opened the cover, I discovered it had belonged to Allston A Kisby of Cottingham. I think he would have been delighted to know that one of his favourite books is alive and well and treasured by a shipwrecked sailor!” 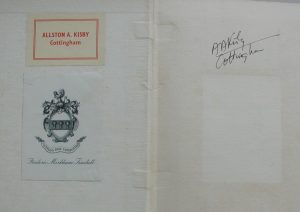 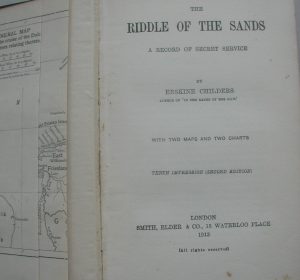 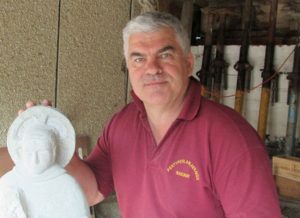 Philip, who now lives in Wales and is continuing in his profession as a scultptor in stone, would love to find out more about Mr Kisby and especially his work as an artist.

If you have any stories to share, please email him at philip.chatfield@hotmail.co.uk. It would be great if you could also copy me in jane@cottinghamhistory.co.uk, as I would be fascinated to hear your stories too!

You can read more about Philip, his work and the shipwreck here.

Philip aboard the Maria Asumpta and an early image of the ship, built in 1858

An actual photograph of the shipwreck – Philip can be seen on the rocks, second from left 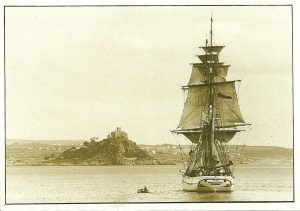 A postcard of the Maria Asumpta sailing from Penzance – Philip is in the small rescue boat alongside, waiting to be hauled aboard to fire the guns in salute as the ship passed St Michael’s Mount 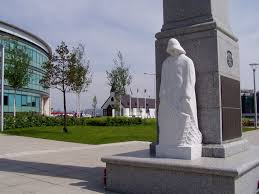