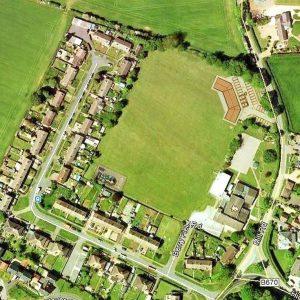 June 2018: Having completed and submitted the Arboriculture Impact Assessment and Tree Protection Plan requested by Corby Borough Council, the Hall’s trustees and architects met with Corby Borough Council Development Control’s Case Officer on 19 June, at CBC’s request, to iron out any queries that might be raised by councillors when the planning application reaches the Development Control Committee.

The Case Officer was happy that he now had all the information he needed, subject to some minor amendments to the elevation drawings. It is expected that the planning application will now be put to the Development Control Committee at their meeting on Tuesday 7 August.

November 2017: A planning application (reference 17/00630/DPA) has been submitted for the new Cottingham and Middleton Village Hall, which is to be located on the Village Acre, a piece of land next to the recreation field on Berryfield Road.

You can view the plans on Corby Borough Council’s planning portal at https://publicaccess.corby.gov.uk

You can also view the plans and find out more about the new Village Hall on their new website at www.cotmidhall.org.uk. And you can follow them on Facebook too.

In 2005, planning permission was granted for a new village hall in Middleton, to be located on land at the entrance to Glover Court, to be partly funded by Section 106 monies from Glover Court developers Faircloughs.

In July 2012, a survey was developed to find out what villagers wanted from any new recreation amenities in the village, which included a question as to where they would like the new village hall sited, either at the entrance to Glover Court or on the Cottingham recreation field.

Having reviewed villagers’ feedback, it was decided that the new village hall should be located on the recreation field and, in July 2013, the trustees presented initial plans and drawings to villagers at the annual Summer Fete.

In February 2015, a planning application was submitted to Corby Borough Council for the hall, but this was put on hold while a number of issues were resolved, including land ownership and access to the site.

In September 2015, it was agreed that the village hall would be sited entirely on the Village Acre, after the Borough and County councils had agreed in principle that access and exit could be from Mill Road. 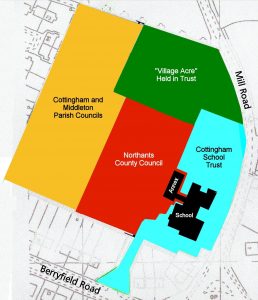 June 2016: Following a meeting of the Northants County Council Joint Planning Unit, the Cottingham and Middleton Village Hall trustees were asked to review the design of the new Village Hall and its position within the Village Acre, which is the area of land to the East side of the recreation field (as shown on the diagram opposite).